Home » Blog » Reed Switch Technology » What are the Basic Principles of Magnet Interactions?

What are the Basic Principles of Magnet Interactions?

“Principles of magnet interactions play an important role in the activation of the reed switches opening and closing.”

The Basic Principles of Magnet Interactions

Reed switch and magnet interaction are a duo that can be used across many different applications. The magnet used will be different, depending on the specific application. There are multiple magnet specifications available on the market. Magnet specifications such as material makeup, dimensions, and geometries will all determine the environment it can be used in. Each different kind of magnet material has a different magnet force makeup as well as a different flux density. Furthermore, other factors like mounting position and other magnetic fields involved define the energy of the magnet. The most preferred and used forms of magnets are cylinders, rectangles, rings, and discs. Although all magnets no matter the shape or size, work similarly, depending on the different requirements of the function of the application the magnet and reed switch are being used in, the magnets can be magnetized in many different ways.

The Details of Magnet Interactions

Even though some functioning specifications that depend on the chosen magnet may change, the overall function of the magnet with the reed switch never really changes. In the applications where a magnet is used to activate a reed switch, a few things always have to be considered to ensure success. For example, the environmental temperature needs to be considered. High temperatures can cause irreversible damage and will have a heavy impact on the magnetic force and long-term stability. Another thing that has to always be considered is the magnet placement in the application. This will play a huge role in the overall function of how the reed switch will work.

The permanent magnet and reed switch are both perpendicular. The magnet influences the outer magnetic lobes. Relative closure, holding and opening points appear along the x-y axis. Parallel magnet movement along the x-axis will cause the reed switch to close and open two times.

Magnets have unique properties that allow us to operate reed switch sensors without drawing any power. Drawing no power in this power-hungry world is a true asset. The Standex team is standing by to fill the ever-changing needs of customers across industries, and across the world, through our Partner, Solve, Deliver® approach. Get in touch with our team to learn more about our carefully engineered solutions.

For more information on how a reed switch is used with a permanent magnet download our Reed Technology Databook. 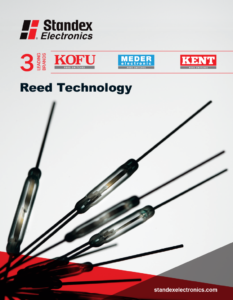 This databook will provide a deep dive into what a reed switch is and how a reed switch works which include extensive examples of various applications, features, and benefits.

What is a Reed Switch and How Does it Work?